Mystery Behind the Service to Mankind - PowerPoint PPT Presentation 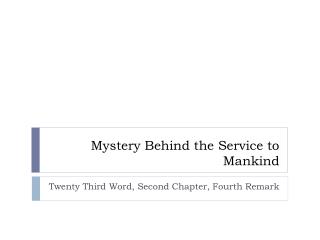 Mystery Behind the Service to Mankind Mystery Behind the Service to Mankind. Twenty Third Word, Second Chapter, Fourth Remark. Differentiation?. What is the first thing that comes to your mind that differentiates man from other creation? What is it that makes man receive the service it does? What is it that gives man his rank?.

Mystery Behind the Service to Mankind

The Gwylfa Therapy Service (GTS) - . an evaluation. what is the gts?. specialist service for people with a personality

Section 1 - . introduction to biochemical principles. chapter 1. biochemistry: an introduction. life: it is a mystery!.

SERVICE EXCELLENCE …another name for Customer Service - . service excellence is not just a good attitude, it’s a

Chapter 4: Redemption and the Paschal Mystery - . the mystery of redemption. 1. the inauguration of the paschal mystery.

ELKEN - . a well-known direct-selling company in malaysia and other countries. synonymous with innovation, quality and

The Mystery of Half- Life and Rate of Decay - . the truth is out there. by cansu tÜrkay 10-n. before we start. at the