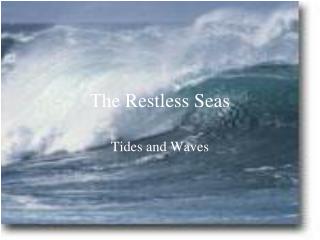 The Restless Seas. Tides and Waves. Tides. The daily rise and fall of the ocean seen along the shore Extremely long waves moving through the oceans High tide : when the ocean reaches its highest elevation on the shore Restless - . your friend tells you she has to rest for the pssa’s a. say ok? b. say whatever?. your friend says please

The Restless Ocean - . kayla phillipson. exploring the ocean . ocean water is mostly salt water. what is s alinity? it is

The Restless Oceans - . 23.5. explain how the properties of ocean water change with depth. atmosphere &amp; ocean

The Restless Earth - . inside earth. your task…. you will design a diagram of earth’s interior to scale you will

The High Seas - . read unclos arts. 86-89. what part of the oceans constitute the “high seas”? which states have the

Restless Continents - . continental drift : the hypothesis by alfred wegener that states that the continents once formed

SEAS - . special entry access schemes. what is seas?. for vtac applicants who have experienced educational disadvantage

SEAS - . first meeting of the year (lots of info today so please bear with us) if you have any questions throughout, just

GCSE Geography – The Restless Earth - If the yellowstone supervolcano erupted... volcanologists suggest: magma would be