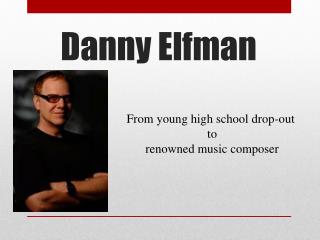 From young high school drop-out to renowned music composer. Danny Elfman. Childhood . Danny Elfman was born in Los Angeles, California on May 29, 1953 Danny’s mother, Blossom Elfman , was a writer of children’s books, and his father, Milton Elfman was a teacher. If lions could talk: attempts at mapping over the borders - . keynote address by danny dorling university of sheffield