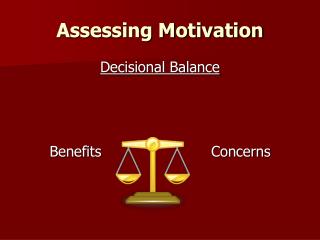 How to Get Your Kids Motivated - Using the influence of sport and content that rewards, educates and inspires, fanzland

Role of Motivation in Reading - . reed 663 dr. sharon pitcher. rafe esquith. rafe esquith, the author of teach like your

Tools and Methods for Assessing the Efficiency Of Aid Interventions - . markus palenberg dac network on development

Assessing motivation and willingness to change - . what i need people to think about. learning outcomes. to assess

Motivation to Read: What Matters Most? - . barbara a. marinak (bam234@psu.edu) penn state harrisburg linda b. gambrell (