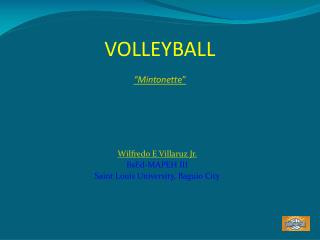 Welcome to our classroom - . unit 9. do you want to go to a movie?. basketball. baseball. soccer ball. volleyball.

Arizona Region of USA Volleyball - . one in four girls and one in six boys are sexually abused before the age of 18 –

The Volleyball Brand: What makes it unique? - Kathy deboer, avca executive director spring conference may 8, 2009 why

WELCOME TO THE 2015 PRODIGY VOLLEYBALL PARENT INFORMATION MEETING - . how many returning from last year? how many new to