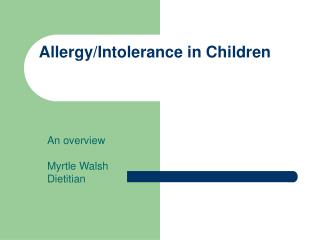 protect your child against allergens?

FOOD ALLERGIES - . objectives. after this presentation, you will be able to: define the terms food allergy and food

Food Allergies - . what is a food allergy?. an immune reaction that occurs after eating a certain food also known as a

Food Allergies - . what the food service worker needs to know by rachel mathisen. what is a food allergy?. it is an

How Dangerous Are Food Allergies? - . michael daines, m.d. assistant professor the university of arizona department of

Unpleasant reactions to food - . extension. learning objectives. to understand there are many different reasons for

Lactose Intolerance or Milk Allergy? - . wic and nutrition services department of health and senior services . what is