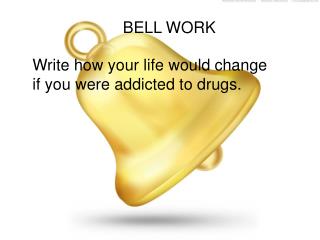 BELL WORK. Write how your life would change if you were addicted to drugs. REVIEW. What are the two types of medicines? Prescription and over the counter Any effect of a medicine other than the one intended is called what? Side effect. REVIEW.