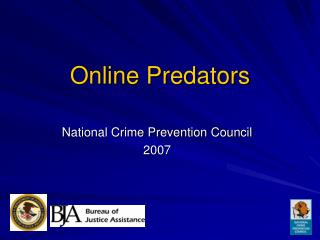 Online Predators - . national crime prevention council 2007. goal of this presentation. to inform parents of the dangers

Online Predators - . by: savanah pepper and olivia kuhn. shocking statistics. savanah - have you ever wondered about

BEWARE OF ONLINE PREDATORS - . do you know what an internet predator looks like?????. do you really know who you are

Predators - . predators are animals that kill and eat other animals. gestation. period of pregnancy delay gestation

Online predators: how safe are we? - . a photo presentation by: michelle ocasio &amp; brianna perez . what is an

Internet Safety And Avoiding Online Predators - . learning objective. today, we will identify and avoid situations that

Pheasant Predators - . and stocking birds. predators. the greatest predators of the pheasant are the red fox, the striped

Pests and Predators - . the not-so-good, the bad, and the ugly. predators and pests what we will cover . mites: tracheal

Predators and Prey - Structural and behavioral adaptations. predators and prey. 1 . acute senses that are used to locate