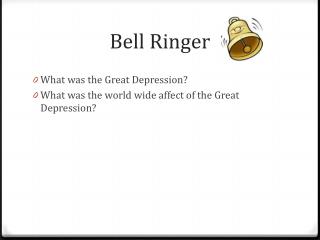 Label the following pictures as Mutualism, commensalism, or parasitism: - Bell ringer: complete the question and turn in

BELL RINGER - . what subatomic particle is not located in the nucleus?. history. atomic history research. chapter 3.

Standard 2 - . part 2: how ecosystems work. bell ringer, 9/4. get your tribe points get out your squirrel island hand out

Bell-ringer: 11/13/12: Review of Vocab - . copy and complete the following sentences using the word bank: a. requiem b.