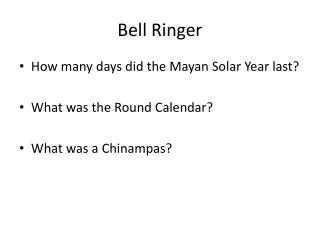 Bell Ringer. How many days did the Mayan Solar Year last? What was the Round Calendar? What was a Chinampas?. Ch 9: Mayans, Aztecs, & Incas. Mesoamerica. Mayans. Believed they have existed from 300-900 C.E. Based on the Yucatan Peninsula Influenced other groups in Mesoamerica. Bell Ringer - . 1. a group of soldiers were standing in the blistering sun facing due west. their sergeant shouted at