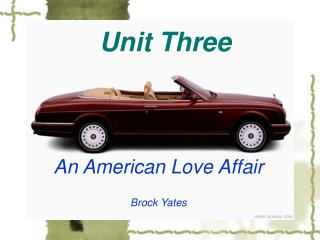 Unit Three. An American Love Affair Brock Yates. Cars and Culture. The History of Cars. Can you guess what “an American love affair” refers to?. Do you know why Americans regard their cars as their love affair? America is a society on the wheel. Almost every family has its own car or cars.