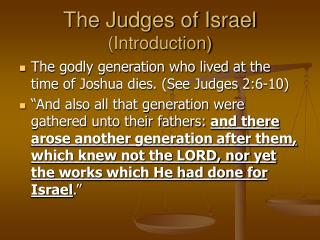 The Judges of Israel (Introduction) The Judges of Israel (Introduction). The godly generation who lived at the time of Joshua dies. (See Judges 2:6-10)

The Judges of Israel (Introduction)

Judges - . deborah and gideon. after joshua dies. what’s so special about judah?. “ the sceptre will not depart from

The Election of Judges - . a discussion on whether we follow america down the election path justice k.a cullinane. ‘

Judges - . israel after moses. joshua leader of the israelites find the promised land occupied – it was great land!

THE BOOK OF JUDGES! (Review) - . what’s it all about?. question #1. describe the pattern that occurs repeatedly in the

Chairman of Judges - . to be, or not to be? that is the question!. chairman of judges. ask yourselves two

The Judges - . 6 th grade religion mrs. moschetto. who were the judges?. the judges were the voice of god after joshua

THE JUDGES CYCLE - . the cycle of unbelief. num_33:52 then ye shall drive out all the inhabitants of the land from before