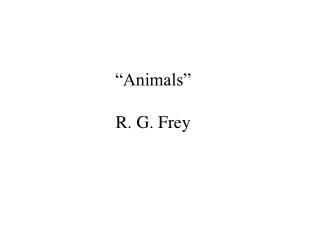 “Animals” R. G. Frey. POSITIONS ON ANIMAL EXPERIMENTATION. Abolitionism = df. All animal experimentation should cease immediately no matter how significant it may be to humans or other animals. Tom Regan supports this.

Market and Competition Who’s buying, and how much, and from whom? How are you different? KNOWLEDGE IS POWER - Class 5