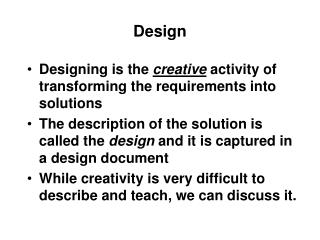 Design. Designing is the creative activity of transforming the requirements into solutions The description of the solution is called the design and it is captured in a design document While creativity is very difficult to describe and teach, we can discuss it. Design For Excellence (DFX) - . case example management team identifies issues or wants an objective view of how to

Tom Ford– Master Designer p 30-31 - . warm-up questions . which of these famous fashion designers have you heard of?

Understanding by Design - . session one. backward design is a process of lesson planning created by grant wiggins and jay

Principles of Design - . fundamental guidelines to aesthetic design that govern the organization of the elements and

Roadside Safety Design - . fall 2013. most of the material taken from: roadside design guide (2011) published by aahsto.

The Worldwide Graphic Language for Design - . chapter 1. objectives. describe the role of drawings in the design process