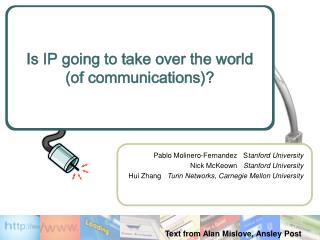 Voice Over IP - . by: jon peterson. introduction. voice over internet protocol (voip) communications systems are a

Where the World is going - . coal. i levels of emission that are harmful to the atmosphere not renewable, they will not

Will Metropolises Take Over the World?

Video-over-IP Unified!! October, 2012 - . video over ip. the world has evolved. but, where is the value for the

What is TCP/IP - . transmission control protocol / internet protocol tcp and ip are two of the major network protocols of

Is China Taking Over the World? - . international law of the american bar association 2006 spring meeting april 6, 2006

Prepare your Network for Voice … over IP - . the “what and why” of a voip assessment!!. chris nabinger cto,