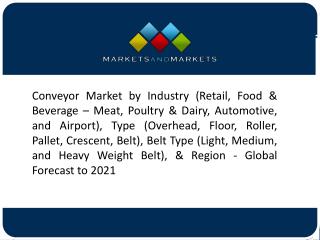 The belt conveyor type is expected to dominate the retail industry conveyor system market. Belt conveyors are made of one or more layers of material and run in an endless loop. They are easy to maintain and are suitable for linear running. Power belt conveyor types are being used in certain retail industries as they help to increase productivity, easily integrate with the companyâ€™s existing automation system and work efficiently.