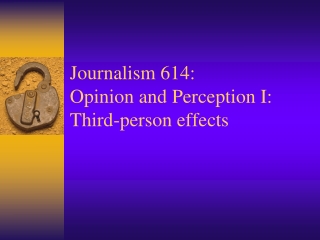 Journalism 614: Opinion and Perception I: Third-person effects. Concerns about the Media. Various categories of media spark concern: Political Advertising Pornography Misogynistic Music/Videos Violent Television What else? What is the nature of the concern?. Basic Third Person Concepts. CHAPTER 3 - . perception, attribution, and judgment of others. learning objectives. define perception and discuss some of

Environmental Journalism JOU 9742 FIMS UWO Bill Kovarik, PhD - . what is environmental journalism? why is it important? .

Media effects - . laswell’s model of mass communication. who says what in which channel to whom with what effect.

Journalism Final - . caitlin arnold. what is journalism?. journalism is a profession in which even the most basic

Journalism and Ethics - . today: lecture, scenarios, film. journalist code. the central purpose of journalism is to

The Face and Person Perception: Insights from Social Cognition - . kimberly a. quinn and c. neil macrae. foundation of

Chapter 15 - . consumer influence and the diffusion of innovations. opinion leadership. the process by which one person

The Story so Far - . what we know about the business of digital journalism -grueskin, seave &amp; graves (2011).

Effects That Drugs and Hormones Have On Perception - Katie campbell &amp; melanie ressa. effects that drugs and