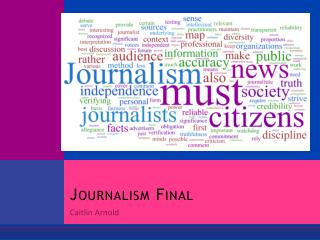 Journalism Final. Caitlin Arnold. What is Journalism?. Journalism is a profession in which even the most basic questions, such as the nature of news and the process of gather and disseminating it, or being examined and debated contiously.

“Checkbook Journalism” - . by collin hyte. what is checkbook

Journalism - . the job of a journalist. in the career of journalism, there are many long hours &amp; an unpredictable

Broadcast Journalism - . ten differences between broadcast and print. #1: be conversational. in broadcast, you write the

Broadcast Journalism - . is your favorite class. let’s talk about the quiz. those of you who read did very well. those

Journalism/ Newswriting - . 5 th hour ms. roller. my history- i have written for . the collegian college newspaper at csu

Photo Journalism - . by jackson schreiber and alex shulman. what is the function of a photo?. to communicate general

Yellow Journalism - . what is it…. william randolph hearst. joseph pulitzer ii. a term first coined during the famous