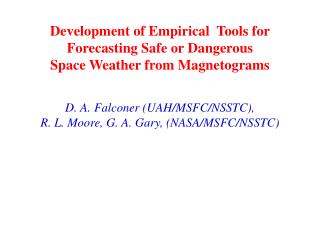 Development of Empirical Tools for Forecasting Safe or Dangerous Space Weather from Magnetograms. D. A. Falconer (UAH/MSFC/NSSTC), R. L. Moore, G. A. Gary, (NASA/MSFC/NSSTC) . I. Results of Work in Progress.

First Law of Thermodynamics - . contributions by: john l. falconer &amp; will medlin department of chemical and

Olivia and The Fairy Princesses - . by: ian falconer. summary. olivia was getting mad she didn’t know what to be, her

Interviews Andrew Falconer - . right, so now you are all expert at pitching. the interview what will we ask? what is a