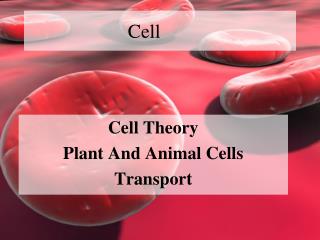 Cell Growth and Division - . chapter 10. 10-1 cell growth. limits to cell growth the bigger a cell is, the more demands

Cell-to-Cell and Cell-to-Matrix Adhesions - . test your knowledge: where would you find the basal lamina ? proteoglycans?

Cell Structure - . chapter 5 . typical animal cell . cell membrane . what separates the cell from the outside

A cell is found to have a rectangular shape. What type of cell would this most likely be? - Plant cell animal cell fungi

Aim What is a cell? - . living things. common to all living things is the cell. cells. animal cell. plant cell. parts of

Chapter 7: CELL MEMBRANE - . membranes = “the edge of life”. what must a membrane do?. let some things leave cell /

The Cell Wall - . nigel gibson, nick lazzati. the functions. the cell wall protects the cell and its organelles it gives