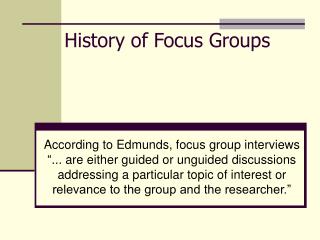 History of Focus Groups - . according to edmunds, focus group interviews “ ... are either guided or unguided

Focus Groups and Student Learning Assessment - . office of assessment and accreditation indiana state university. what is

What is a Group? History of Groups Outline - . class exercise what is a group? members of groups interact groups have

GCSE History at RNS - . medicine through time with a focus on surgery. germany 1918 - 1945. vietnam war. what skills will

FOCUS YOUR THOUGHTS - . journal: think about the quote above: what does it mean to you ? what is history? why do we study

Focus Groups - . focus groups are…. directed group discussions about topics of interest the group is usually not