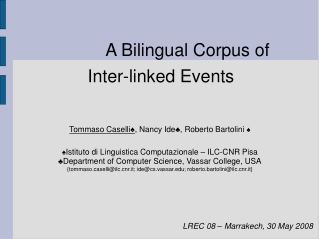 Definition of a corpus - Research on written or spoken texts can now be carried out with corpus linguistics. the

Uses of a Corpus - . “[e]xplore actual patterns of language use” develop “materials for classroom language

Publishing a Corpus - . presentation by sandra busch. the planning stage. can others make use of your corpus too? is it

A Summary of Events - . lecture 2. postwar tensions. in many ways, the cold war began even before the guns fell silent in

A Chronology of Events - . relationship between the faculty of medicine (fom) and clinical faculty (cf). relationship

What’s in a Corpus? - School of computing faculty of engineering . what’s in a corpus?. eric atwell, language

A Newspaper Corpus Analysis - . china and europe in the papers. sources :. the new york times – aprox. 25.000 words the

What is a CORPUS? - “ a corpus is a collection of pieces of language that are selected and ordered according to