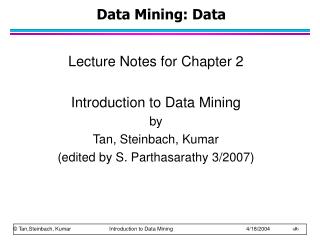 Data Mining: Data. Lecture Notes for Chapter 2 Introduction to Data Mining by Tan, Steinbach, Kumar (edited by S. Parthasarathy 3/2007). What is Data?. Collection of data objects and their attributes An attribute is a property or characteristic of an object Data Mining: Concepts and Techniques - Some of these slides are taken with some modifications from:. data mining:

DATA WAREHOUSING AND DATA MINING - . course overview. the course: what and how 0. introduction i. data warehousing ii.

Data Mining 2 - . data mining is one aspect of database query processing (on the &quot;what if&quot; or pattern