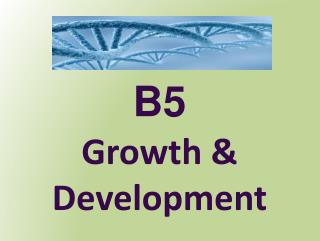 B5. Growth & Development. All living things are made up of cells. Animal and Plant Cells. What else do we have to add?. Specialised cells……. cells in multicellular organisms can be specialised to do particular jobs. Tissues and Organs.

A Plan for Growth - . pacific coast natural foods. background. we are excited about our acquisition of idaho foods, a

Growth and Development of the Adolescent: 11 to 18 Years Chapter 27 - . learning objectives. state the ages of the

Limits to growth - . lecture 5-2. limiting factors. many factors can limit population growth. they can be either density-

Introduction to Economic Growth and Instability - Chapter overview. how is economic growth measured and why is it

Crystal Growth - . what factors control the size and purity of single crystals? -nucleation and growth. if nucleation