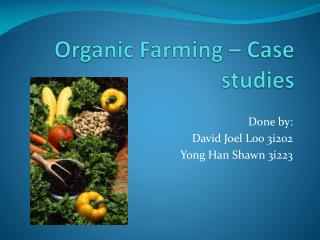 Organic Farming – Case studies . Done by: David Joel Loo 3i202 Yong Han Shawn 3i223. What is Organic Farming?. Organic farming is a farming method that aims to work in harmony with nature rather than against it

Can organic farming save the world? - . royal society-wolfson professor of soils &amp; global change institute of

MANGO FARMING EXPERIENCE - . learning from experience the logic and reasons of natural organic and biological farming

Preventing Another Dust Bowl - . by: emily flynn and chyna law. organic farming policy. all local farms must use organic

Qualitative Studies: Case Studies - . introduction. in this presentation we will examine the use of case studies in