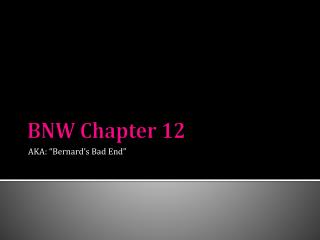 AKA: “Bernard’s Bad End”. BNW Chapter 12. We saw it earlier…. By now, it’s quite obvious that John knows and recognizes that Bernard is using him for fame and notoriety. People want to see John, but to do so – they must go through Bernard. . The “Hidden” Truth from Bernard. BNW Chapter 11 - . this is the beginning of act iii: john’s life in london and how the world state gets rocked…. the

BNW Chapter 17 - . the chapter on philosophy. john’s argument about this world. john argues that to lose intelligence

BNW Chapter 7 - . analysis notes. at the start of the chapter…. lenina feigns interest to what the reservation really

BNW Discussion Questions - . ch 11-16. billy shakes. why all the shakespeare references? who makes them? how do these