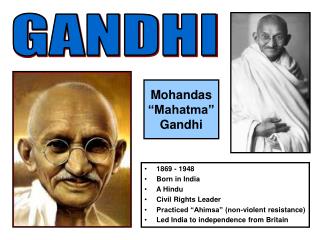 HIND SWARAJ OR INDIAN HOME RULE - . mahatma gandhi. in my opinion it is a book which can be put into the hands of a

UNIT 2 Culture Shock - . a nation’s culture resides in the hearts and in the soul of its people. — mahatma gandhi.

Presentation on: - . gsm basics. presented by: sandip thakkar saurabh gandhi. fixed line telephones. what are the

FAMOUS HISTORICAL PERSONALITIES - . mahatma gandhi also called as bapu. he is the father of our nation. gandhi jayanti