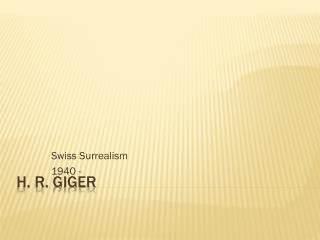 Swiss Surrealism 1940 -. H. R. Giger. Giger is the son of a chemist. He spoke of a father who viewed art as a "breadless profession", and strongly encouraged his son to enter into pharmaceutics. R-H + Base  R: - + H-Base - Slides 2 through 6 introduce students to the acidity of terminal alkynes compared to other

H-R Diagram - . absolute bolometric magnitude. the abm value includes all types of emr a star emits. the abm is the

H-R Diagrams - . an h-r diagram is…. a graph of stars’ brightness and temperature it also shows color since

H-R Diagrams - . an h-r diagram is…. a graph of stars’ brightness and temperature it also shows color since color is

The H R Diagram - . hertzsprung - russel. some stars are very big, others are very small. some are very hot and some are

Choose any 3 images - . recreate the chart on page 17 on separate paper. complete a chart for each image. mother of seven

Customer Relationship Management (CRM) - . “ if you leave client retention to chance, chances are you ’ re going to