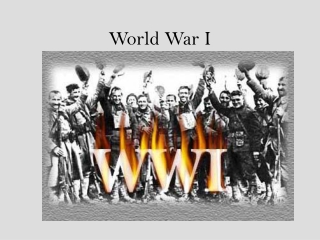 First World War (WW1) was a global military conflict which involved the majority of the world's great powers.

World War 1 - . 1914-1918. why did congress reject the league of nations?. background information european allies were

World War 1 1914-1919 - . by leah cheverie. student outcome. students will be expected to analyse the role ww1 played in

World War 1 - . by: haille madill 3b. german involvement . cause of the

World War 1 Timeline and Trench Warfare Summary - . by: camron tye. archduke ferdinand and his wife in serbia, from

World War 1 - . world history. central powers allies. lead-up to ww1. the explosive that was world war one had been long