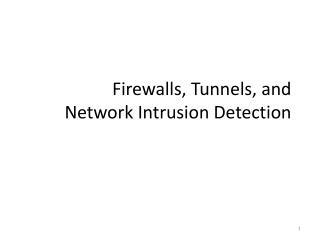 Firewalls, Tunnels, and Network Intrusion Detection - . firewalls. a firewall is an integrated collection of security

Network Security - . attacks technical solutions. the problem of network security. the internet allows an attacker to

Firewalls - . what are firewalls?. a hardware device and/or software program which sits between the internet and the

Lecture 14 Firewalls - . modified from slides of lawrie brown. the need for firewalls. i nternet connectivity is

Internet Firewalls - . what it is all about. concurrency system lab, ee, national taiwan university

Firewalls - . firewalls. most widely sold solution for internet security solution in a box appeal not a substitute for