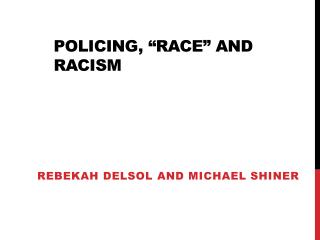 Policing the crisis: ‘Race’, ‘Riots’ and the Regulation of Stop and Search - . michael shiner &amp; rebekah

Racism and the Effects of i t - . by zach johnston and dylan giager. about racism. racism is discriminating against a

Christian Views on - . what is racism?. a good definition: prejudice + power discrimination due to prejudice about race,

Does Racism Still Exist? - . examining the history of race relations in america and its impact on education today. rules

RACISM - . by javier garza english 2 2 nd. what is racism ?. the belief that all members of each race possess

Hatred in Society - . racism. “ negative behaviour based on an incorrect assumption that one race is inherently

Race and Ethnicity - . sociology. lesson outline. race and ethnicity defined what is a minority? racism , discrimination

From institutional racism to community cohesion and beyond - . professor andrew pilkington. structure of presentation.