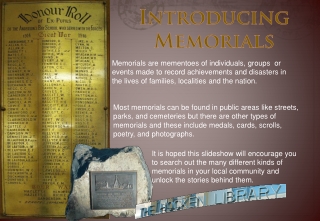 Introducing Memorials. Memorials are mementoes of individuals, groups or events made to record achievements and disasters in the lives of families, localities and the nation. Introducing Memorials - . memorials are mementoes of individuals, groups, or events, made to record achievements and

Introducing Xero - . introducing xero. xero is built for you and your clients on the same page features direct daily bank

INTRODUCING TES - . for department course evaluators. this presentation will introduce you to the powerful features of

Advanced Syntax - Lecture 7: tense and negation. advanced syntax. the clause is made up of distinct structural areas with

Assignment 1 – Introducing Yourself - . part 1 your name where you are from your interests your ambitions about 70-80

All About Me - . introducing me. my family. my pets. me. things i like to do. about. my favorite books. quiz. introducing

Introducing RSF - . antranig basman, caret, university of cambridge. what is it , doctor??. introducing rsf. rsf is a web

Martyrs Memorials in Modern Lebanon: Representing the National through the Ethno-Religious - . lucia volk department of