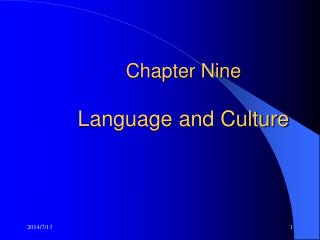 Chapter Nine Language and Culture. Teaching focuses:. --- The definition of “culture” --- The relationship between language and culture --- Sapir-Whorf hypothesis --- Some cultural differences in language use. 1. What is culture?.

Chapter 4 Affirming Identity, Language, and Culture - . to what extent is identity affected by communication technology

Language and Culture - . language. language, our spoken, written, or gestured work, is the way we communicate meaning to

Culture and Language - What is culture culture refers to the entire way of life of a society, “the ways of a people”.

Chapter Nine - . the tourist customer and the tourism destination. international tourism. growth enormous since the 1960s