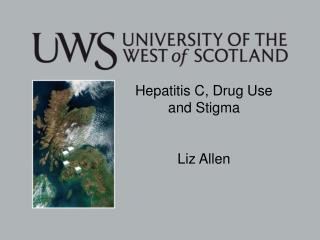 Hepatitis C, Drug Use and Stigma Liz Allen. Hepatitis C is a blood-borne virus Can cause serious damage to the liver First indentified in 1989 Known as non-A, non-B hepatitis Test developed in early 1990’s. What it is Hepatitis C?.

Epidemiology of drug use and Hepatitis C in New York City (and beyond) - . holly hagan, phd director, research methods

Liz Brooks-Allen February 2010 - . social impact assessment working for us and our clients. 1. who are the connectives?.

Hepatitis C - . by: lisa iacopetti angela bravo dominic cruz. the liver. what does my liver do?. stores vitamins, sugars,

Hepatitis C - . foundation for faith based organizations www.nychepbc.org. goals. to understand the liver and it’s role

Hepatitis C - . prepared by division of viral hepatitis centers for disease control and prevention. 1/17/03. features of

Drug Use and Hepatitis C Are we mindful of the gaps? Dave Liddell, SDF - . gaps. scale of the problem – are there still

Hepatitis C – a relationship with stigma - . construction and representation in the mainstream print media. aim: to