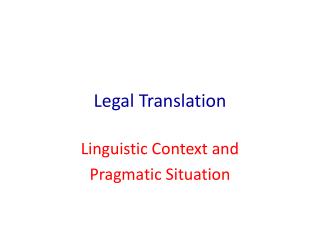 Text and Context in Translation - 1. text and context2. context from different perspectives2.1. philosophical and

Translation: A Difficult Task? - . hassane darir. translation, the misunderstood activity. some of the difficulties in

Translation - . rna directed synthesis of a polypeptide. translation. in the process of translation, a cell interpets a

Is there TRANSLATION in your life? - . think of a moment in your native language life when you needed translation. what

Statistical Machine Translation - . translation without understanding colin cherry. who is this guy?. one of dr. lin’s

Translation Company in Delhi - Nvisagetrans.com - Nvisage translation (india) founded in 2011, is an emerging leader in

How to get your legal documents translated easily and effectively? - Beltranslation.org has garnered success and