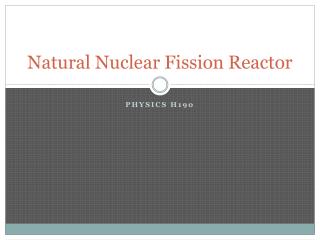 Natural Nuclear Fission Reactor. Physics h190. Fission. Discovery and implementation of fission is arguably one of the more important and controversial scientific and technological discoveries in physics in the 20 th century Surprisingly this may just been a naturally occurring phenomenon

PNPI-ILL-PTI collaboration at ILL reactor in Grenoble and at WWR-M reactor in Gatchina - . present status and future

PNPI-ILL-PTI collaboration at ILL reactor in Grenoble and at WWR-M reactor in Gatchina - . present status and future