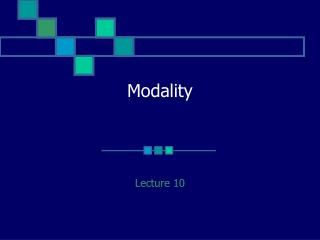 Modality. Lecture 10. Language is not merely used for conveying factual information . A speaker may wish to indicate a degree of certainty to try to influence other people in various ways (authority/submission, permission, make people do things or stop them from doing things). .

MODAL VERBS - . mr. javier nuÑez &amp; mr. aleix torras. index. what are modal verbs? how are they different from

“Dosimetry and optimisation of Cone Beam CT for dentomaxillofacial applications” - . s afety and e fficacy of a new

Psychology in the Media - . danny oppenheimer kirsten thorpe. what is media?. any modality of communication between

The use of mutli-modality to support and enhance discovery learning (An exploratory approach) - . doug dickinson