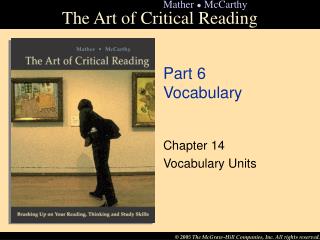 Part 6 Vocabulary. Chapter 14 Vocabulary Units. Vocabulary: Unit 1 Each of the following eight units will introduce you to important prefixes, suffixes, and root words, and give you vocabulary words using these word parts. Each unit will draw on what you learned in the previous units. Vocabulary 6 - . leaving the emerald isle. censorship. because of the questionable lyrics, the song was subjected to

Vocabulary #6 - . who’s who?. spielberg. scorcese. director. the most influential creator of the film who determines

VOCABULARY #6 - . english 10. word wall. diaspora people dispersed by whatever cause to more than one location or people

Vocabulary #6 - . arrogant . ( adj ) acting superior to others; conceited. the act of holding together co = together he

VOCABULARY PART 2 - . his gait was strange, a wiggly wobble down the hall. the semblance of the old man in the black