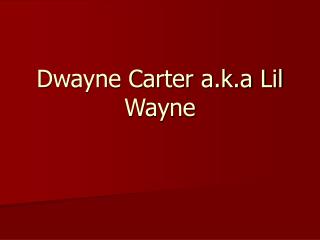 Dwayne Johnson - . by austin matusz. life . dwayne johnson was born on may 2, 1972. he was born in hayward, california.

Mirror Lil Wayne Ft Bruno Mars - . uh, with everything happening today you don't know whether you're coming or going but

On Tour With Lil Wayne - . this presentation will take you on tour with the greatest artist of all time!. presented by:

Conventions Of Lil Wayne - . what we will look at. existing music videos of lil wayne’s – ‘lollipop’ ‘on

Lil Wayne By: Kalee Macon - . the quest:. life is a beach, i’m just playin’ in the sand. to find new lyrics to ra p

How You Remind Me -NickelBack - . by serenalinklater . . the picture i have chosen, is the three wise men . “never made