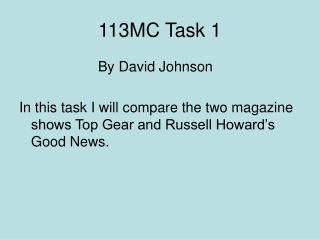 113MC Task 1. By David Johnson In this task I will compare the two magazine shows Top Gear and Russell Howard’s Good News.

Blackface and Minstrel Shows - . blackface. white performers would blacken their faces with burnt cork or greasepaint,

The American Burlesque Show - . the commercialization of sex &amp; the commodification of women performers. lydia

Show, Don’t Tell - . create a picture in the reader’s mind by writing sentences that show what happened rather than

NEXTGEN TASK DEMONSTRATION - . this demonstration reviews how to send and respond to tasks, and will help you understand

MYP Task-specific clarification - . true or false ?. the wording of the descriptors can be changed when assessing

Task 11 - . describe the national, international and organisational standards and conventions that are used for the