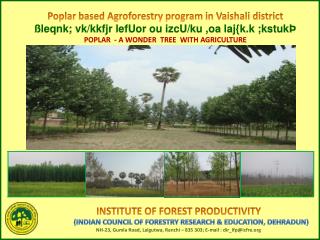 AGROFORESTRY - . diversification options for communities impacted by the mountain pine beetle. purpose of the

BEYOND AGROFORESTRY - . using a diversity of resources and a low tech approach to develop sustainable enterprises on

Agroforestry - Enriching our lives with trees that work. agroforestry. this presentation was developed by the usda

Agroforestry in Italy - . agroforestry was the past, can it be the future?. adolfo rosati - piero paris italy.