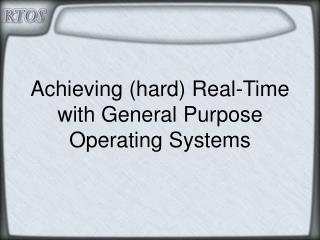 Achieving (hard) Real-Time with General Purpose Operating Systems. Motivation. There is a conflict between the requirements of real-time systems and the need to run common day applications. Can we use a general purpose OS for real-time applications?. Outline. Basic definitions

FreeRTOS - . introduction to multitasking in small embedded systems. most embedded real-time applications include a mix