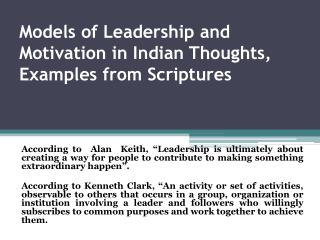 Models of Leadership and Motivation in Indian Thoughts, Examples from Scriptures Models of Leadership and Motivation in Indian Thoughts, Examples from Scriptures. According to Alan Keith, “Leadership is ultimately about creating a way for people to contribute to making something extraordinary happen”.

Models of Leadership and Motivation in Indian Thoughts, Examples from Scriptures

10 Survival Life Hacks During Pregnancy - For all your life up until now, you’ve probably pretty much felt like you

Motivation - . motivation basics. what is motivation? an internal state that arouses, directs, and maintains behavior.

Leadership - . leadership. what style of leader am i? what are my strengths/weaknesses? are my methods effective?.

Lean Leadership - . summary of topics to be covered. understanding the impact of human relationships in the business

By: Florelisa Gonzalez-Severino - The relationship between faculty leadership style and student satisfaction in online