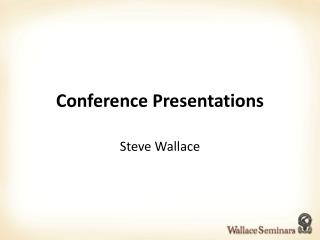 Conference Presentations. Steve Wallace. The person who presents the research gets the credit. Paul Chu: first superconductor with a boiling point above liquid nitrogen Maw-Kuen Wu and Jim Ashburn declined to speak and are not remembered. The presenter gets the credit. Presentations - . an easier form of assessment?. paddy woodman the university of reading. background: introduction of

Presentations - . an informative, persuasive, or educational talk to an audience using visuals that display information.