The Coming of the End - PowerPoint PPT Presentation 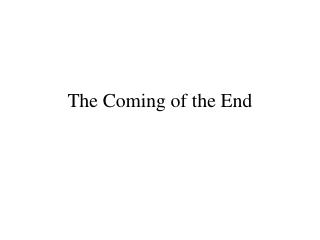 The Coming of the End The Coming of the End. Allies Enter France. By June 10, the Allies had broken the Atlantic Wall for good Fought the battle of the Hedgerows July 17- Rommel is injured. Assassination Attempt On Hitler. Count Klaus Schenk von Stauffenberg attempts to kill Hitler Rommel is linked to the plot

The Coming of the End

Table19 Christmas Insights - With christmas coming earlier every year, we take a look at how consumers shopped over

Eph 2:7 that in the coming ages he might show the immeasurable riches of his grace - In kindness toward us in christ

Introduction - The jewish wedding, and the parallels that exist in the relationships between god and the children of

RECAP - The jewish wedding, and the parallels that exist in the relationships between g-d and the children of israel, and