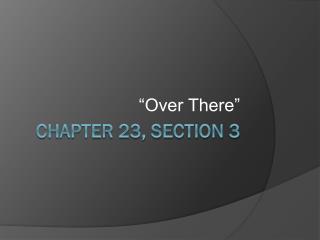 “Over There”. Chapter 23, Section 3. Hard Times for the Allies. American troops reached France in 1917 they saw desperate Allies Million of soldiers had died Troops in trenches were exhausted and ill British and French civilians were near starvation. A second Russian Revolution.

CHAPTER 23 SECTION 2 - War with spain. chapter 23 section 2. americans looked longingly at cuba they thought it was like

Chapter 23 - . section 1. the french revolution begins. the old regime-social and political system in france during the