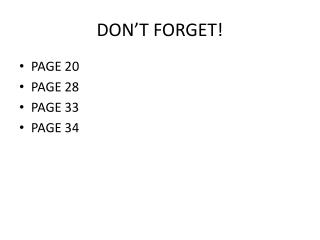 The Silent Way - . tell me and i forget teach me and i remember involve me and i learn benjamin franklin. introduction

A Secret Lost in the Water - . by: roch carrier . plot. when you go off to live your life, would you forget all your

‘I hear and I forget. I see and I remember. I do and I understand.’ Chinese proverb - . active learning examples.

Unit Seven - . language structure. see the following sentences and pay attention to the grammar rules they use:. i

Serving God When the Trumpets Sound - . men are quick to forget that they are frail and need the protection of god. only

AP Government - . final review don’t forget to use the review book and shmoop to study – and write full sentences on

DO NOW - . go back to your notes on the seven s’s of csi. review them and write down which the one you would take first

Happiness, where are you? - . even if happiness forgets you a little bit, never completely forget about it. jacques

How To Write A LD Debate Case - . parts of a ld case. top of the case contentions closing. example resolution. write this