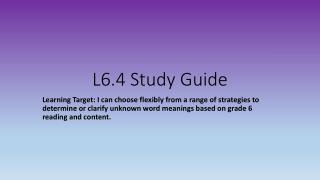 L6.4 Study Guide. Learning Target: I can choose flexibly from a range of strategies to determine or clarify unknown word meanings based on grade 6 reading and content. Strategy 1: Try substituting words in place of the unknown word. STUDY GUIDE - . there is no more bellwork in 2009!  get out your study guide and start working!!! you will only have

Study Guide - 1. explain the role religion played in the life of the ancient greeks. how did their polytheistic

Study Guide - . chapter 4. the sons of liberty dumped 342 chests of tea into boston harbor to protest the tea act.

Study Guide! - . a court system made up of both federal and state courts- dual court system. authority of both state and

Study Guide - . seeker of knowledge. question 1. what were most of the symbols that were used in the hieroglyphs

Study Guide - 1. british naturalist that came up with the theory of evolution by the means of natural selection. 2.

Study Guide - . antarctic journal. question 1. on november 17, the author wrote in her journal. what is the main idea

Study Guide - . 1. what is transmutation?. where one element turns into another element through radioactive decay. 2. the