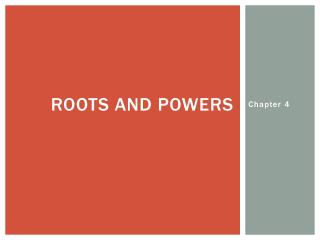 Roots and powers. Chapter 4. 4.1 – Estimating roots. Chapter 4. radicals. Estimate each radical, and then check the real answer on your calculator. Consider whether each value is exact or an approximate. . Pg. 206, #1–6 . Independent Practice. 4.2 – irrational numbers. Chapter 4. B. Powers of Roots - . math 10: foundations and pre-calculus. key terms:. find the definition of each of the following

Square Roots and Cube Roots - . september 17, 2013. square root. the square root of a nonnegative number is a number

Powers and Exponents - . powers and exponents. a power is represented with a base number and an exponent. the base number

Powers and Exponents - . multiplication = short-cut addition. when you need to add the same number to itself over and