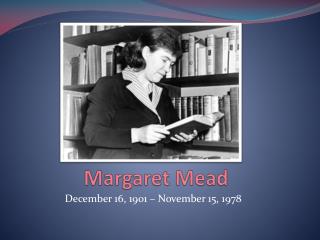 Margaret Mead. December 16, 1901 – November 15, 1978. Background. -Margaret Mead was born on December 16 1901 in Philadelphia to a household of Social Scientists -She entered DePauw University but after a year she transferred to Bernard College where she majored in psychology

Shrinking Lake Mead - Nevada's lake mead, the largest capacity reservoir in the united states, is at record low levels as

The Business Case for ADR - To mediate or not? why the 21st century workplace needs adr/mediation. the business case

On the Grasshopper and the Cricket - . john keats. presentation by: emad masroor hashir shahid faaris khan. the poetry